Segregation wall strangles the life out of Bethlehem – The Irish Times 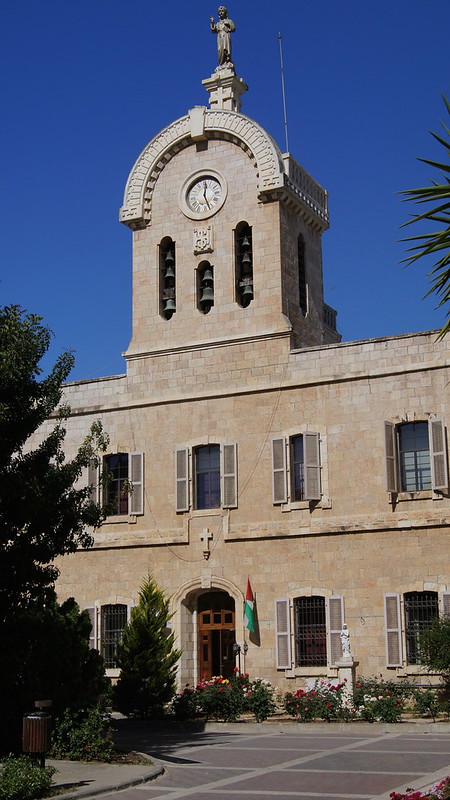 Segregation wall strangles the life out of Bethlehem

One is left with a feeling of senselessness and tragedy on seeing the segregation wall encircling the city of Bethlehem, writes John Kelly. 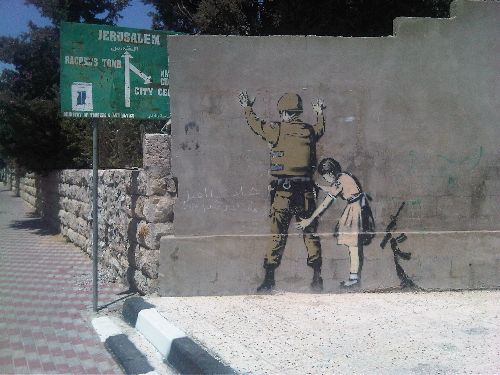 The main highway through Bethlehem was deserted except for a mongrel dog skulking in the dusty shadows. Everything was closed. The tourist shops had shutters up, the hotel’s front door was locked and the residences were clearly empty, and some were being knocked to the ground. They were all on the wrong side of, or right in the way of, the eight metre high segregation wall, currently under construction by the Israeli army, whose lone soldier, complete with sub-machine gun, was watching our every move as we nervously took a few photos.

Bethlehem has been cut in half. Families who lived there for many generations and shopkeepers who plied their tourist trade on that road for years were told to get out. No apologies, no reason – just get out, this is now Israeli territory.

The path of the wall conveniently arranges that Rachel’s Tomb in the centre of Bethlehem , most sacred shrine for the Jews, is now transferred to Israeli territory. And running right down the main street which heads on to Hebron, the wall veers off the street through an olive grove, cutting that too in half and thereby taking a large part of the livelihood away from its owner whose family has tended it for generations.

Right across the West Bank , the route of the wall deviates from the internationally accepted pre-1967 borders, known as the Green Line, in many cases cutting Palestinian farmers off from their farms so that at this moment, thousands of tonnes of citrus fruits and olives are unattended and destined to rot later this summer.

One example, out of many hundreds of similar ones, tells the sad story of an elderly farmer whose home is some 60m across the road from his olive tree farm. But with the construction of the wall right on his doorstep, he now has to travel 22km over dirt roads to get to it. More often than not, he is not permitted to get through the Israeli checkpoint.

As always when that happens, no reason is given. It would appear that the instructions given to the Israeli guards on these checkpoints are simply to humiliate the Palestinians and make life as awkward for them as they can. Farming is the main source of income for the Palestinians along the fertile route of the wall, and separation from their farms and the lack of mobility is causing enormous hardship.

With its creeping strangulation by the wall over this past year, Bethlehem is now a Palestinian ghetto, so that getting in and out of it for locals is very difficult, and subject always to Israeli checkpoints.

The road from Bethlehem to Jerusalem is some 10km by car, and even allowing for the checkpoint, the driving time for non-Palestinians is about 20 minutes. For Palestinians to make that journey they must have travel permits and it will take up to two hours or more as they are not permitted to use the main roads, but must go on circuitous gravel back-roads, with numerous checkpoints. The result is that for local people, Bethlehem is a virtual prison and locals don’t travel unless it’s really necessary and they have plenty of time and patience.

Travelling on that road recently with a Palestinian De La Salle Christian Brother, who was dressed in his black and white clerical outfit, we managed to get through the checkpoint waving my Irish passport, with no questions, only dirty looks.

Strictly speaking, he should have been refused passage through that checkpoint and taken out of the car, or alternatively, we could all have been turned back, but this time, the clerical garb and my passport apparently did the trick.

The wall has serious implications for the survival of the university in Bethlehem . Founded in 1973 and run by the De La Salle Brothers, Bethlehem University is now a thriving liberal arts and sciences university of some 2,400 students. Heretofore, its students travelled to it daily from all over the West Bank and Gaza , particularly from the nearby towns of Jerusalem and Hebron . But that traffic is now destined to stop, and the university will have to rely for its future student enrolment exclusively on the local Bethlehem area. This, of course, is an impossible situation for a modern university to operate in. The tortuous journey from anywhere else makes it very difficult for students to attend classes, especially when one can never be sure of the checkpoint being open, or of being allowed through even when it is.

Likewise for its professors and administrative staff, many of whom live in Jerusalem , the daily harassment and uncertainty about getting to work each day is threatening their jobs, compounding the crisis.

The future recruitment of academic staff from outside the walled area is now almost impossible. Though formally a Christian institution, Bethlehem University caters equally and without favour for both Christian and Muslim students, the latter being the majority of the student population. The ethos of student life and high academic standards are exemplary. The Brothers do a great job and are highly esteemed by all sectors of the Palestinian community throughout the West Bank.

It is extraordinary that Israel has the policy of treating its Palestinian neighbours as less than human and giving them lesser privileges than they give to their domestic animals. It is surely also extraordinary that they are allowed to inflict this appalling suffering and human deprivation by the rest of the world, led by the United States which since 1967 has, with few reservations, given its full support to the Israeli government and its policies towards the Palestinians.

Despite a number of UN resolutions, the Oslo 1 and 2 agreements, the Sharm El-Sheikh agreement, and just recently the agreement on movement and access, brokered by James Wolfensohn after the Gaza disengagement of last autumn, the Israeli government gives them all the two-finger salute, and proceeds with the building of its monstrous settlements and now this segregation wall, further and further into the Palestine lands.

Agreed borders are totally ignored. And just recently, along with the US , and lately the EU, the Israeli government expressed its surprise and criticism at the results of the democratic elections which elected the so-called terrorist party, Hamas.

It beggars belief that prime minister Ehud Olmert, standing alongside George Bush on the steps of the White House on May 23rd, appealed to the Palestinian people to engage in peace talks while at that very same moment, his troops are throwing them out of their homes, destroying their livelihood and treating them like animals.

His appeal is all the more outrageous since, despite becoming prime minister almost six months ago, Mr Olmert has made no attempt whatsoever to engage in dialogue, or even meet, the very moderate president of the Palestinian Authority, Mahmoud Abbas.

It is clear that the Israeli government knows that the US stands behind it, politically and financially, whatever it does, and so it thumbs its nose at all who dare criticise them. The unquestioning support of the US is the rock on which the Israeli state precariously stands, and it is now only in the US that anti-Zionism equates to anti-Semitism, which, of course, is nonsense. But what is most extraordinary is the senselessness of it all.

The ordinary Israeli is, of course, and it is silly to have to say it, a normal and very regular nice person, who loves, hopes, cries, prays and fears like the rest of us, but most seem to have closed their eyes and minds to what their government is doing.

Not all, however – the Israeli Information Centre for Human Rights, through its website, www.btselem.org, documents in considerable detail the many breaches of human rights by its government.

Please visit this website if you doubt what I’m saying here.

What their government is doing is not only tragic and economically disastrous for their Arab neighbours, but it makes no sense.

Who can believe that throwing people out of their homes, taking their lands, ruining their livelihood, prohibiting their freedom of movement in their own land, and closing their shops, hotels, universities and schools are the correct strategies to bring about peace and friendship, and to help them establish friendly relations with their neighbours?

The wall is a bizarre and absurd course of action and has succeeded only in being the prime and very effective recruitment strategy for Hamas, thereby getting them elected and replacing the more moderate Fatah party. Indeed, the election of the Hamas government has been the wall’s major achievement to date.

Now, however, there is reason to believe that Israel ‘s special claim for universal sympathy is waning, as indeed is America ‘s prestige globally with its overseas policies, and their cosy relationship may not last forever.

For Israel , a radical realignment towards acceptance of the right of the Palestinian people to a state of their own, which will have to be politically and economically viable, is urgently called for, before the political cauldron of the Middle East boils over with terrible consequences for everyone involved.

There can be no winners in such a scenario.